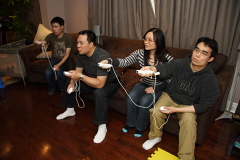 A short recap for those who weren’t paying attention: It’s been about sixty days since I got the Wii. This may explain why I have appeared to drop off the face of the planet. I’ve spent an inordinate amount of time rescuing Hyrule, bashing Raving Rabbids, and perfecting my tennis game. Now I can write a semi-meaningful review of this console (and a few popular games)… Does the Wii live up to its expectation as Nintendo’s big next-generation console revolution, or does it fizzle, falling into the “Nintendo is for kids” stereotype?

The hero returns. Discussed first and foremost has to be The Legend of Zelda: Twilight Princess. If A Link to the Past was the pinnacle of 2D Legend of Zelda success, Twilight Princess is truly its 3D counterpart. The game is masterfully designed and the gaming experience presented is smooth and polished. Dungeons and the puzzles within are designed to be amazingly compact, every object serving a purpose, with minimal time-wasting “running around”. Mini-bosses and bosses are astounding: in scale and how they spring to life on the screen. The plot is endearing, one of the best I’ve ever seen in a Zelda game, with truly emotional moments. The soundtrack contributes greatly to the action and is quite memorable (if only they orchestrated all of it!). I also much prefer using the Wii-mote for control: shooting arrows feels much more natural with the pointer, and the motion-sensing for slashing or shield blocking adds significantly to the realism of the game. Buy the Wii just for Twilight Princess.

But the question on most minds is, what about other than Twilight Princess? Finishing Twilight Princess took fifty hours of play-time over a month and a half (I do have to work, you know). Although Twilight Princess has many things to challenge and entertain you with even after main story completion, it can’t entertain forever. Does the Wii hold its own aside from this blockbuster launch title?

The old can play too. I arrived home one day and was astounding to find my father playing Wii Sports Tennis. Now, this is a man who hasn’t touched console games since Super Mario Brothers on the original NES, and couldn’t, try as hard as he might, get past the platform jumping in World 1-3. It’s amazing how accessible the Wii is to just about anyone: bring a Wii to a party and people of any age, even those who have never played a console game, want to give the Wii-mote a shot. Take that, PlayStation.

Wii Sports, the pack-in game for Wii in North America, is surprisingly endearing. Although it was quickly abandoned at first (trumped by Zelda, of course) I find it a nice short game great for some quick entertainment. Bowling, tennis, and golf are realistic and enjoyable and the rating system offers motivation to return and play frequently. However, the true gem of Wii Sports has to be the training mode, with 15 mini-games to hone your skills on. Hitting home runs in baseball is gratifying, but unfortunately the simplifications such as automated defense make the game not so challenging. Also not so hot is boxing, due to iffyness with depth-detection on the Wii-mote. More on that later.

Great for Parties. Nothing beats four Wii-motes (if you can find them!) at a party. Wii Sports, Rayman Raving Rabbids, Wario Ware: Smooth Moves and Monkey Ball: Banana Blitz are excellent in multi-player mode, creating many opportunities for pictures of your friends and family doing ridiculous things with a Wii-mote and nunchuk. Bowling and tennis are group favourites in Wii Sports. There are a few enjoyable, truly interactive multi-player mini-games: in Rayman‘s Bunnies Can’t Herd, you compete against the other players to collect farm animals faster than they can; in Bunnies Can’t Slide you attempt to get closer to the center with curling-esque bumping. Monkey Ball’s split-screen Goldeneye style first-person-shooter Monkey Wars is a real winner, as is their hoovercraft bumping mini-game. Unfortunately, the rest of the short collection of multiplayer mini-games are “do this action faster than the other people” and get pretty boring pretty fast.

It is also unfortunate that the single-player modes of these games also leave much to be desired. Don’t get me wrong, most mini-games are truly innovative and fun — like Rayman’s DDR-style dancing. It’s just that after playing through the game in single-player mode, there’s little or no challenge or motivation to revisiting single player minigames.

Where’s the online multi-play? One of the highly touted features of the Wii is WiiConnect24, which provides 24/7 WiFi connection of your Wii to the Internet through your existing 802.11b or g wireless network. So far, it’s been used to allow surfing the Internet on your Wii, purchasing virtual console games through the Wii Shop, getting weather updates straight to your Wii, and receiving Wii-mail. Wii-mail makes your Wii’s disc slot glow a cool blue. Unfortunately, although these features may impress, they don’t provide lasting entertainment beyond the first week.

This one feature could have saved single-player mode in Rayman and Monkey Ball with some sort of online stats or multiplayer mode. The ability to play with friends or random strangers, proudly display high scores and stats, or design and trade levels would add instant replay value to games. As it stands, after trying Banana Blitz for a day at a friend’s, I have no intention or motivation to purchase the game.

Although you can hardly blame the 3rd-party developers Ubisoft and Sega for this. It was recently revealed that Nintendo didn’t make the API for use of WiConnect24 available to 3rd-party developers. That means it’s up to Nintendo to release a title (Animal Crossing Wii? Pokémon? Battalion Wars?) that makes use of what’s been one of their most touted features. Smart move by big N, since that first title sets the momentum, and online multiplay can make or break the Wii console. The jury is still out.

Where are you pointing, anyway? The Wii-mote accuracy has been surprisingly good. When the Revolution was first announced, we spent an inordinate amount of time trying to figure out how the Wii-mote and sensor bar would work. The solution is refreshingly simple. (The sensor bar is an array of IR LEDs; the sensor on the front of the Wii-mote triangulates distance, uses an internal gyroscope for determining orientation, and notifies the console via Bluetooth.) Side-to-side and up-and-down pointing is surprisingly accurate, although the first few minutes are indeed awkward. The one major problem has to be depth (towards and away from the screen). Only a few mini-games in Banana Blitz and boxing in Wii Sports make use of this feature, and their control leaves much to be desired. Other than that, the Wii-mote’s performance is stellar.

Virtually Console? Virtual Cashcow. I’ll admit, I was suckered once or twice into giving money to the big N through the virtual console. Generally, it was late at night, and a case of “I’m bored” was instantly gratified using a credit card (or store-purchased Wii points). So far I’ve purchased Mario 64 (for Nintendo 64) and Gunstar Heroes (for Sega Genesis), two games on two consoles I never owned.

It’s fun and a great idea, and the classic controller adds to the gaming experience. Unfortunately, I don’t feel generous enough to purchase all the SNES games I already have snes9x ROMs for; the same goes for the NES games I already have for my old console. Although it would be much more convenient than digging out and reconnecting the NES whenever I have a craving to play Legend of Zelda or Super Mario 3.

Also surprisingly missing is the support for multi-player in the virtual console. Emulators like snes9x have been supporting over-TCP/IP multiplayer for years. Why not support this on the Wii? This would be the one feature that would convince me to shell out for more games. Four-player online Super Mario Kart or Super Mario Kart 64? Wowsers, Bowsers.

Wrapping it up. Nintendo’s Wii rides on the success of its flagship game, Twilight Princess. Its next big hero, Mario, returns in Super Mario Galaxy, planned for later this year. Will the Wii hold its weight until then? My opinion is that multiplayer support in games (both major and virtual console) will be a defining factor in the Wii experience. It’s the only thing missing now, and would keep me (and others) glued solidly to my Wii and TV for hours on end. I hope Nintendo heeds this call. If not, I could always just wait for the next Zelda, Legend of Zelda Wii, whose release will likely be delayed until 2009 or beyond. Surely that game will have at least fifty more hours of awe-inspiring entertainment.