Instead of the usual dreary post-vacation monotony, I’m going to try something new. From over twelve hundred frames snapped during a February jaunt in California, I’m going to summarize my trip with just twelve. Call it California in 12 Photographs. It’s taken a few months to find the twelve, but it’s done, finally done… Read on for a flavour of the trip that they try to capture. 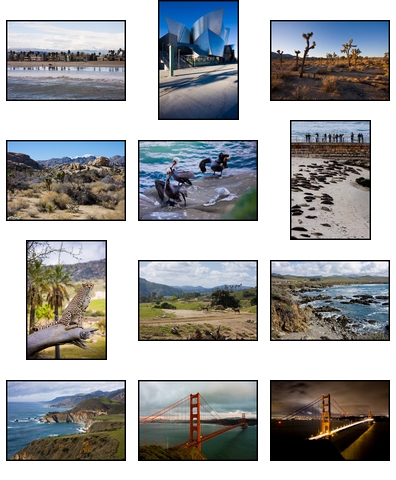 Getting to California was almost a disaster, due to some pretty poor foresight. Hmm, flight departing Buffalo at 6:30 AM. Great idea: wake up at 1 AM, leave Toronto at 2 AM and cross the border into the US at 3 AM! Better yet, drive a dirty, beaten-up 1997 Honda Odyssey! And when the US customs agents ask you where you’re staying, don’t elaborate further than, “Umm, hotels.”

After being detained by US customs for an hour for a complete car search (at least they pointed out our flat tire), we made it to our spectacularly horrible flight, on a sub-par airline. (A free flight though, as compensation for a previous debacle with same airline. Go figure.) When finally reunited with our luggage and belched from the belly of LAX, it was 3 PM, leaving a few hours to run around the city before rush hour… 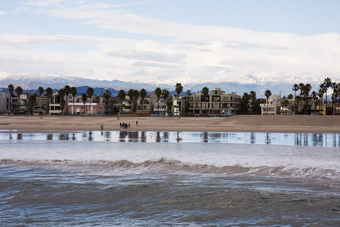 Our Fodor’s guidebook promised “year-round action” on the Venice Boardwalk near the Venice Pier, including “bikini-clad rollerbladers and bicyclists”. We were mildly disappointed to discover the only souls braving the 10 degree Celsius (50 Fahrenheit) weather were us. Oh, and a cold-looking crew filming an even colder-looking girl in a bikini running around on the beach. How typical of Los Angeles. Cold weather aside, the Venice Pier is a nice spot to do some ocean gazing, and the adjacent streets are filled with beach-houses with interesting architecture and colours. 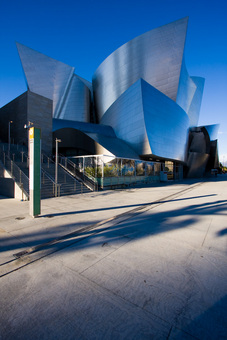 Frank Gehry designs rather sexy looking buildings. The Walt Disney Concert Hall in downtown Los Angeles is no exception, featuring sensual curves, like fins or claws reaching for the sky, clad in shiny stainless steel that reflect blue sky and ground and anyone who happens to be around. So shiny, in fact, that portions of the hall was sanded down after Los Angelinos complained about hotspots on the sidewalk due to a parabolic-mirror effect.

The music hall is nestled within a collection of impressively attractive skyscrapers downtown, reminding me of great East Coast cities — but with large, wide avenues and the occasional palm tree, just to remind you that you are indeed still in California. We hustled out of the downtown core to run away from the rush-hour traffic, only to have it catch up to us before Pasadena.

When I think of California I think of sunny beaches, chiseled coves, and lush redwood forests; definitely not Joshua Tree National Park, a hauntingly desolate preserve about two hours east of Los Angeles. The park straddles two deserts, the Mojave and Colorado, and features distinctly different plants and wildlife in both. We entered the park well before dawn, from the north; flourishing in the Mojave Desert, with its higher elevation and cooler climate, is the Yucca or Joshua tree, which gives the park its name. 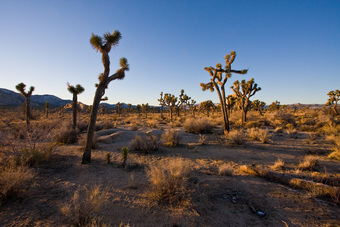 The park is home to very large bare-rock boulders and formations, rounded from years of erosion and exposure. Some are named monuments, resembling large marbles (“Giant Marbles”), or even a human skull (“Skull Rock”). Strewn amongst the landscape, in between pockets of Yucca trees and shrubs, and set against a backdrop of mountains, these boulders and formations create a rather surreal and interesting landscape.

San Diego embodies much of what we expect of southern California; sunny and beach-filled, a place to relax and enjoy summer. We spent a day exploring San Diego proper. A morning was spent exploring the island community of Coronado, and its key landmark, the Hotel del Cororando, affectionately know as “The Del”, a luxury hotel featuring classic American wooden architecture. 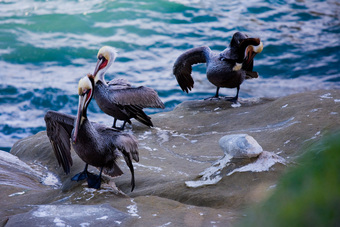 Our favourite place in San Diego was La Jolla Coves, a remarkable ocean-front beach that serves as an enclave for wildlife within the city. The cove is the focal point of La Jolla, a trendy resort community nestled between seven miles of Pacific coastline and the hillside of Mount Soledad, only twelve miles north of downtown San Diego. 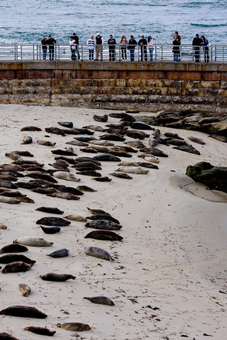 You arrive at La Jolla Coves and work your way down the coastline. Preening on bluffs both near and far are various coastal seabirds and pelicans. Basking on some rocks immediately below are dark sea lions, tightly packed on precious rock real estate. Further down you can scramble into a rocky tidal flat. If you luck out like we did, you can arrive at La Jolla at low tide, giving you lots of opportunity to explore the flats over still-wet rocks and kelp, looking into little tidepools teeming with miniature crabs and aquatic plants.

Further south still you can find a roped-off sandy beach with hundreds of harbour seals resting with their young, all aligned the same direction pointing towards rolling waves. Stay until dusk to watch them wriggle their way to the water’s edge, one by one, and gracefully slip into the water in search of an evening meal. 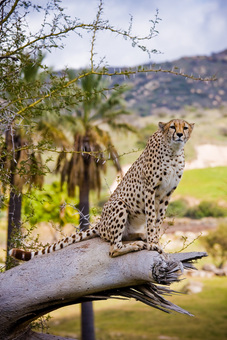 The San Diego Zoo actually comprises of two distinct complexes. The first, for which San Diego is famous, is the zoo within the Balboa Park, a large urban park in the heart of downtown. The second is the San Diego Wild Animal Park, which is located 30 miles away from the city, in the San Pasqual valley. As large 1,800 acre park, it features incredible free-range enclosures where animals are free to roam and live in a more natural environment.

The drive to San Pasqual is surprisingly tranquil and beautiful, over meadows and between green hills. Arriving at the Wild Animal Park, you work your way through several large exhibits. Large aviaries feature African birds, which thrive well in the semi-arid park environment. Thimblefuls of nectar can be purchased to feed colourful lorikeets, which land en masse on your arm to fight over the sweet syrup. Gorillas are surprisingly human-like and “chill” in groups in the shade. Also on display was the park’s newest addition, a baby rhinoceros, being fed by park keepers. 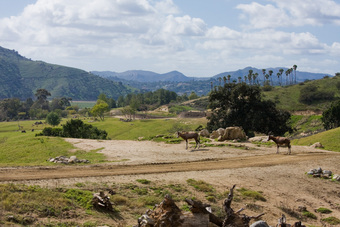 The free-range enclosure is stunning — the “Into Africa” tour takes you into the free-range enclosure aboard a safari-style tram, where you can watch animals behaving in their habitat. Cheetahs rest in their private enclosure, and watch African antelope herding on slopes beyond. Two of world’s six remaining Northern white rhinos are on display along with Indian rhinos and giraffes. It’s remarkable to watch animals behave with their natural instincts: grouping atop high hills for the best vantage point, posting sentries to watch in each direction for oncoming predators. 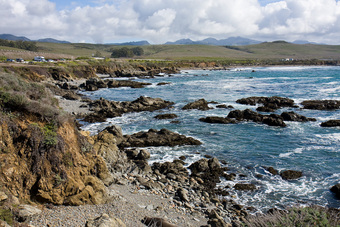 The famous California State Route 1 hugs the Pacific Ocean as it winds its way from Orange County to Mendocino. We followed the Route 1 for a two day drive from Ventura to San Francisco. Some of the highlights of the southern part include: Santa Barbera and its beautiful Santa Barbera Mission; peaceful Cambria and the elephant seal rookery; Ragged Point. 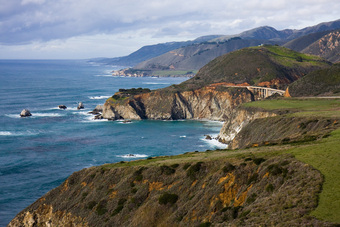 The real beauty kicks in near Big Sur. Frequent lookout points along the highway give stunning views of the undulating coast line, waves crashing into sheer bluffs and a narrow road perched precariously upon it. The route is dotted with state parks, including the scenic Julia Pfeiffer Burns State Park with the picturesque McWay falls. My favourite is the Bixby Bridge, a 714-foot long open-spandrel arch bridge over a gorge.

North of Big Sur is Monterrey. This was a bad weekend to be in Carmel-on-the-Sea or Monterrey; the placed was packed for the AT&T Pebble Beach National Pro-Am. Not to mention Valentine’s Day. We didn’t get to do the famous 17-mile drive and see the famous Lone Cypress due to the golf tournament. The Monterrey Bay Aquarium was a great place to spend a rainy Sunday morning; the 1.3 million gallon Outer Bay tank features sharks, tuna, barracuda, and thousands of sardines fighting over daily feeding frenzies. 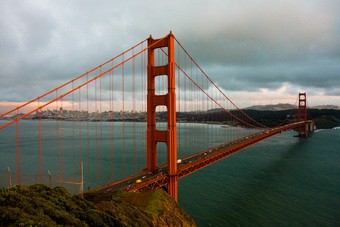 San Francisco is a beautiful walking city, which is refreshing after a week of driving. We ditched the rental car and explored the city by foot for a few days, checking out the different neighborhoods and enclaves, as well as the local tasty eats. My favourite landmark was the Golden Gate Bridge, especially when viewed from north of the city, at the Marin headlands. Also in the vicinity is Muir Woods National Monument, a stunning redwood forest, featuring groves of Coast Redwood up to 258 feet tall.

The very last photo taken on our trip is my favorite, and is below. We had just finished a meal at an amazing sushi restaurant in Sausalito, and were driving south to cross the bridge and catch our flight at the airport. Would there be time to take one last photo? It was cold and the path to the lookout was dark and treacherous, not to mention wet from the earlier rains. There was a good bit of waiting, for a large cargo freighter to pass under the bridge. There were winds threatening to topple my tripod. But it was quite an amazing sight, alone on that hill, watching the Golden Bridge at night, watching the traffic go by, with the twinkling of San Francisco and Alcatraz lights beyond. I’m glad we did it, a good conclusion to our trip: it was well worth it indeed. 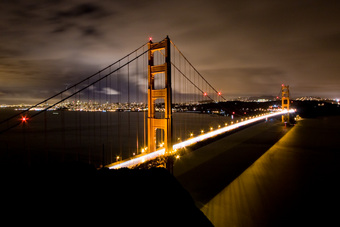 2 thoughts on “California in 12 Photographs”